How much is Hydrocarbon Lubricants costing you?

While industrial lubricants only make up 1% of plant operational costs, the lack of proper lubrication or application can have an adverse impact on total maintenance costs and downtime. More than half of the total maintenance costs, as well as a cause of downtime, is directly related to one of the smallest budgeted items. The ultimate industrial lubricant is one that lasts a long time and “just works.” That means it works just as well under normal temperature conditions, as well as in an extremely hot environment; or when faced with harsh chemicals, like boiling sulfuric acid.

PFPE lubricants are proven to provide the broadest benefits, even in the most extreme conditions without breaking down. Using PFPE reduces equipment failure, maintenance cost, parts replacement and labor costs. More importantly, it reduces production downtime. Though more expensive than petroleum-based and other traditional synthetic industrial lubricants, PFPEs provide a short payback period and long-term benefits.

One of the greatest advantages of using PFPE lubricants is stability across a wide variety of operating conditions and environments. This inert nature is what allows PFPE greases and oils to outlast and outperform competing traditional synthetic and hydrocarbon products.

In addition to PFPE lubricants being chemically inert compared to virtually all chemicals commonly used in most industries, they are also water and oil repellent, solvent resistant, nonflammable, compatible with oxygen and reactive gases and non-toxic. And, they are compatible with most common elastomers, plastics and metals. Even with PFPEs having such extreme capabilities, they are completely safe to handle. When comparing the MSDS of Krytox™ lubricant, a type of PFPE lubricant, to the MSDS of sugar, sugar is more dangerous to handle.

Using PFPE lubricants can contribute significantly to lowering the cost of doing business – industries, such as aerospace, automotive and chemical, have used PFPEs with exceptional performance and reliability in the toughest conditions, where productivity matters and downtime is costly.

Can Your Industrial Lubricant Stand t 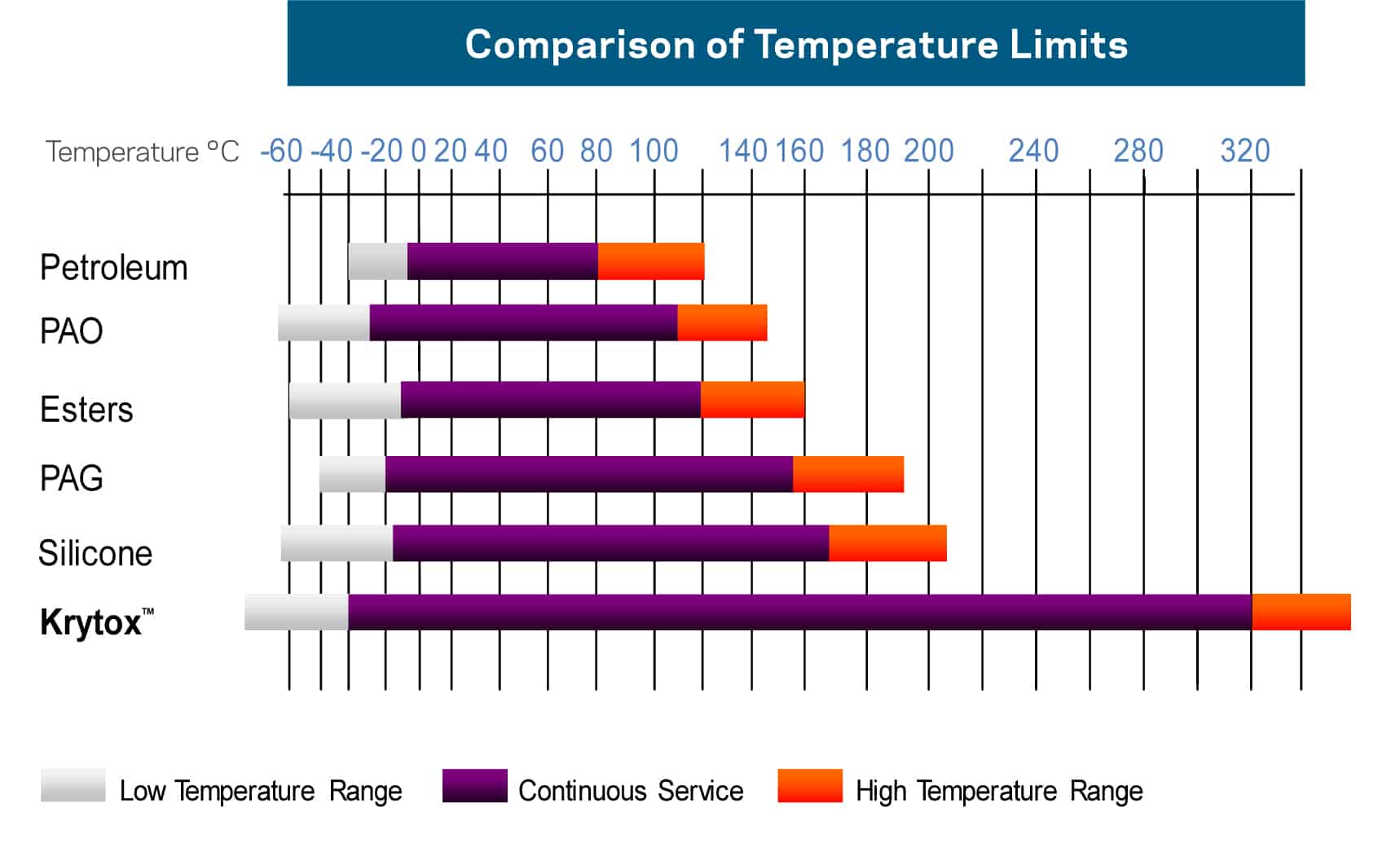 Extreme Temperature Side by Side

In a side-by-side high temperature test, hydrocarbon and PFPE (Krytox™ GPL 227) grease were placed in an oven at 232 °C (450 °F) for 40 hours. The hydrocarbon grease lost 40 percent of its weight (ceasing to be an effective lubricant), and developed tar. Krytox™, the PFPE grease, remained unchanged in weight and appearance (lubricating ability fully intact).

PFPE greases with extreme pressure additives have high load-carrying capability and good lubrication characteristics under boundary and mixed friction conditions, making them ideal for use in high loading and slow speed conditions. In addition, PFPE oils provide inherent extreme pressure performance based on their unique chemistry.

In a Pin and Vee Block Test (ASTM D-3233) – an evaluation of wear, friction and extreme pressure – Krytox™ (PFPE) lubricants reached the maximum load in the test, while hydrocarbon lubricants displayed signs of extreme wear and often caused a catastrophic early failure.

Another test steadily increases the load on a rotating steel ball in contact with 3 fixed balls until they seize and welding occurs, which simulates point contact conditions. The lowest load (Weld Point) data is used to calculate the value of how well the grease prevents wear when operating below the weld point. For many competing greases, the LWI can generally fall between 50 and 100, but Krytox™ greases typically have an LWI well above 100, further illustrating how Krytox™ grease can outperform most competitive greases in both extreme pressure and extreme condition performance.

The Test of Time

PFPEs outlasted hydrocarbons in the ASTM D-3336 test, which evaluates the endurance life of greases in ball bearings by rotating a bearing at a set speed and temperature. At 10,000 revolutions per minute (rpm) and about 177 °C (350°F), all tested hydrocarbon lubricants failed in less than 1,000 hours. Krytox™ AUT 2E45 grease performed for more than 25,000 hours – the equivalent of almost three years – without failing. The test was stopped before the lubricant failed.

Before using PFPEs, a copper rod manufacturer believed lubricating its rollers’ bearings (operating temperatures over 200 °C [400 °F]) every four hours with a synthetic hydrocarbon grease was the longest lasting solution available. By switching to a PFPE lubricant (Krytox™ XHT-BDX lubricant), they lowered re-lubrication to a monthly basis and cut annual bearing failures by nearly 98% (reducing replacements from 186 bearings each year to four). By switching to PFPEs, this copper rod manufacturer reduced maintenance costs, parts costs and production downtime.

The Choice is Clear with Krytox Industrial Lubricants

Traditionally, PFPEs have been only considered for applications running in extreme conditions. Today, more customers are realizing the benefits of PFPE lubrication in the more mundane applications where they had never been considered before. Krytox™ lubricants, a type of PFPE, provides exceptional value in use across a wide range of applications. High performing PFPE lubricants cost more per unit than hydrocarbon lubricants; however, the exceptional benefits of PFPE outweigh the costs: PFPEs cut maintenance costs, reduce part replacement costs and help reclaim lost opportunity.

Estimate Whether You Should Switch to PFPEs